It could be argued that Bugle beads are some of the oldest ‘shaped seed beads’ around. I have classified them as seed beads since they fit into the sizing pat 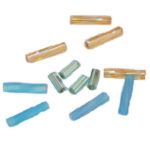 tern that means they can be used alongside all the other seed bead varieties we have on the market.

In this blog, I want to start by showing you bugle beads, talking a bit about how to use them and then giving you some links to patterns to get you started. You may not have known their name before, but I feel pretty sure you will recognise what Bugle Beads look like!

What are bugle beads?

Bugle beads are narrow canes of glass. They come in all sorts of different sizes, but the size refers to the length of the cane, rather than width. To the best of my knowledge, bugle beads are a standard width (I’m talking about the hole size here) and that is, approximately equal to a size 11 seed bead. If you like precision measurements, then this is about 1-2mm. As with other seed beads, there is a sizing system and that reflects the length of the tube. If you know anything at all about beads, then it probably won’t surprise you to know that the sizing system varies from one manufacturer to another! 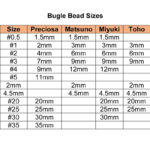 So, in terms of manufacturers: the three big Japanese companies, Matsuno, Miyuki and Toho, all make bugle beads. The only manufacturer in the Czech Republic is Preciosa. I found this handy table with a guide to sizing and conversions between manufacturers. By all means keep it and use it as a reference, but I also issue a word of caution. If you are working with a pattern that specifies a particular brand of Bugle, do keep to that brand since you may find the sizing doesn’t quite work out if you try and swap! It’s basically the same rule as other seed bead brands, which I covered in this post earlier this year. For some patterns this will not matter, but if you are trying to mix different colours within a project do also make sure you keep to the same brand or you will find yourself working with just very slightly different lengths.

How to Use Bugle Beads 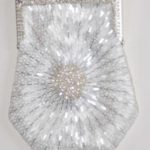 decorate dresses and evening bags. In fact, as you looked at them, you may have thought immediately of intricate bead embroidery. Their shape makes them perfect for adding to create fern-like decoration in a floral motif. If you bead them side by side, you get a lovely textured surface. Depending on the finish you use, this will bounce around light to add some beautiful effects.

You may also be familiar with seed beads used as fringing. You often see them used to add a fringe to a pendant or pair of earrings. I particularly think of this in association with Native American styles. Like all good seed beads, Bugle beads can be used in a 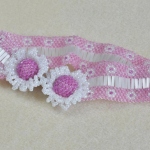 number of bead-weaving techniques as well. They are particularly effective in netting. I think of them for Russian Spiral technique (this is really a variation of netting) and they can work in Right Angle Weave. I have also used them in Ladder stitch and this made a basis from which to work a brick stitch section, as you can see in my daisy bracelet.

You will struggle to use them for Peyote or Brick stitch, but you can of course always add them as an embellishment.

The Pitfalls of Bugle Beads

All beads have a few disadvantages that you should know about so you can work around them. To my mind, the biggest disadvantage with bugle beads is that they can cut beading thread. I believe the beads are made by blowing a long, long tube of glass which is then precision cut into the desired lengths. Sometimes, the cutting process results in a cut that is at an angle. These are really likely to cut through thread, I have found. 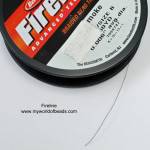 So you want to check that your bugle beads have lovely straight ends to them. Even with this, there is still a danger that the glass edge is a little sharp. So I always recommend using Fireline when you are working with Bugle beads.

Having said that, I began by saying that Bugle beads were created for use in bead embroidery. I do find that because you are anchoring the beads onto the material, there is less tendency for the sharp edges to rub against the thread and break it. I’m not saying this doesn’t happen, but I personally do not use Fireline for bead embroidery because I prefer the feel of the nylon based threads that are a little more like sewing cotton. So, I always use my thread double in any case and, I would recommend stitching through each bead twice when it is a Bugle bead. I think there’s less chance of the sharp edge cutting through four pieces of thread than just one or two!

I have mentioned length and colour, but there is 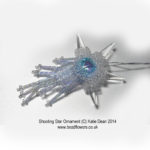 another variation on the bugle bead. You can get twisted bugles. As the name suggests, the cane of glass has simply been twisted into a spiral as it was made. The effect is really beautiful and, due to the twisting, the light bounces off these bugle beads in different ways. So you can use this to great effect to create patterns and clever illusions in your work. I fell in love with the twisted bugle beads when I made my shooting star beaded ornament. I used the bugles for the fringe and the twisted effect really creates some interesting light illusions as the decoration hangs on my Christmas tree.

That seems like a good place to move on to sharing some pattern ideas with you. Keeping with the Christmas theme, how about a beaded angel? The bugle beads make a delightful skirt for her.

I created a simple pair of earrings using Bugle Beads and netting when I wrote the ‘Focus on Netting’ booklet to accompany this website. You can get it here. Keeping to the theme of netting, if you want to try a Russian spiral with bugle beads, then this rope necklace is the pattern for you! 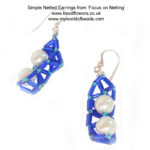 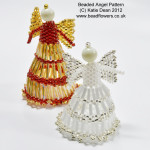 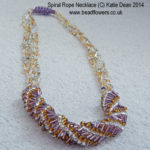 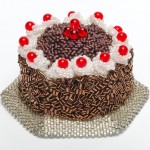 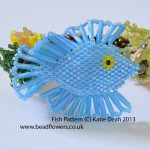 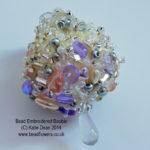 So, I hope that gives you a few ideas and, with any luck, the chance to fall in love with bugle beads.