A lot of people ask me about making beaded boxes using rounded seed beads, rather than Delicas. So, is this something that is possible? What are the pros and cons?

Well, I’ve got a lot of experience in making beaded boxes now. I have also done a lot of experiments in this area over recent months. So, I feel it’s time to address this in a blog post.

The first thing to appreciate is that you have a choice of two main techniques for making beaded boxes. I’m talking about Peyote stitch and Cubic Right Angle Weave.

Depending on what type of boxes you’ve made, or seen, you might be more or less familiar with this idea.

(And if you’re not sure about the techniques, you can learn them both in this online class).

Boxes made with CRAW

If you think about it, CRAW is ideally suited to making a box. It is dimensional in structure and naturally designed to create walls, floor and ceiling.

So, I have made many beaded boxes with this technique. You can see a couple in the sample photos below. 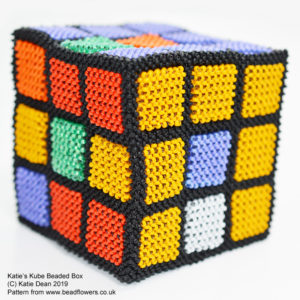 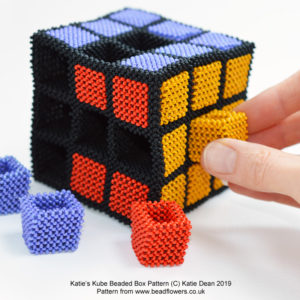 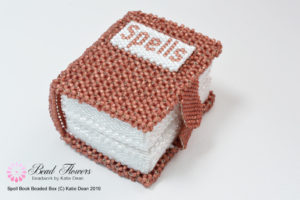 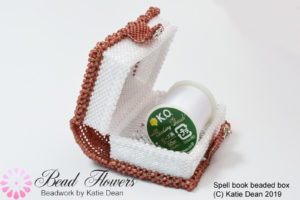 (Both these beading patterns are available from the Beadflowers website, at this link)

The thing about CRAW is that it will work equally well with rounded beads or cylinder beads. So, since you don’t have to use cylinder beads, I normally choose to work with the rounded seed beads for a CRAW beaded box.

This doesn’t affect the structure of the beadwork, or its stability. And since the rounded seed beads are generally less expensive, it makes sense.

Beaded Boxes Made In Peyote Stitch

Now, for beaded boxes made with Peyote stitch, it’s a different story.

A lot of those are constructed using geometric shapes as a base and then tubular Peyote to build up the sides. So, if you are familiar with your beads, you will know that Cylinder beads are ideally suited to Peyote stitch.

Their very regular, straight sides mean that the beads lock together really tightly. So, this creates an incredibly firm ‘fabric’ of beads. And, in order for the box to be self-supporting, it does need this firm fabric. 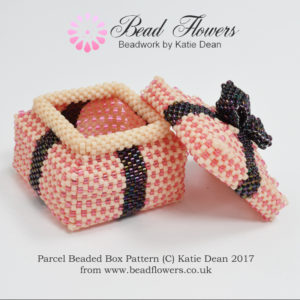 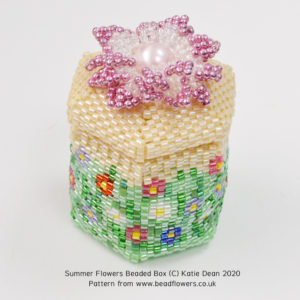 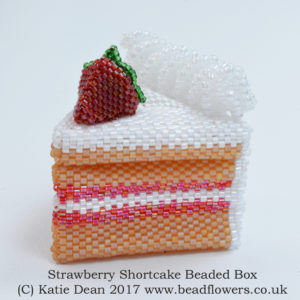 A couple of years ago, I challenged myself with an experiment. Could I use Peyote stitch to make a beaded box with rounded seed beads?

It proved to be very interesting.

I did indeed manage to create the box. It was this starfish beaded box. And the reason I made it was because I was taking part in the TOHO challenge. So, I had been sent a collection of TOHO beads, most of which were their rounded seed beads. I did have just a few AIKO beads in the collection they sent. But not enough for a full beaded box. And, since beaded boxes are one of my ‘signatures’, I really wanted to reflect that in my project choice. 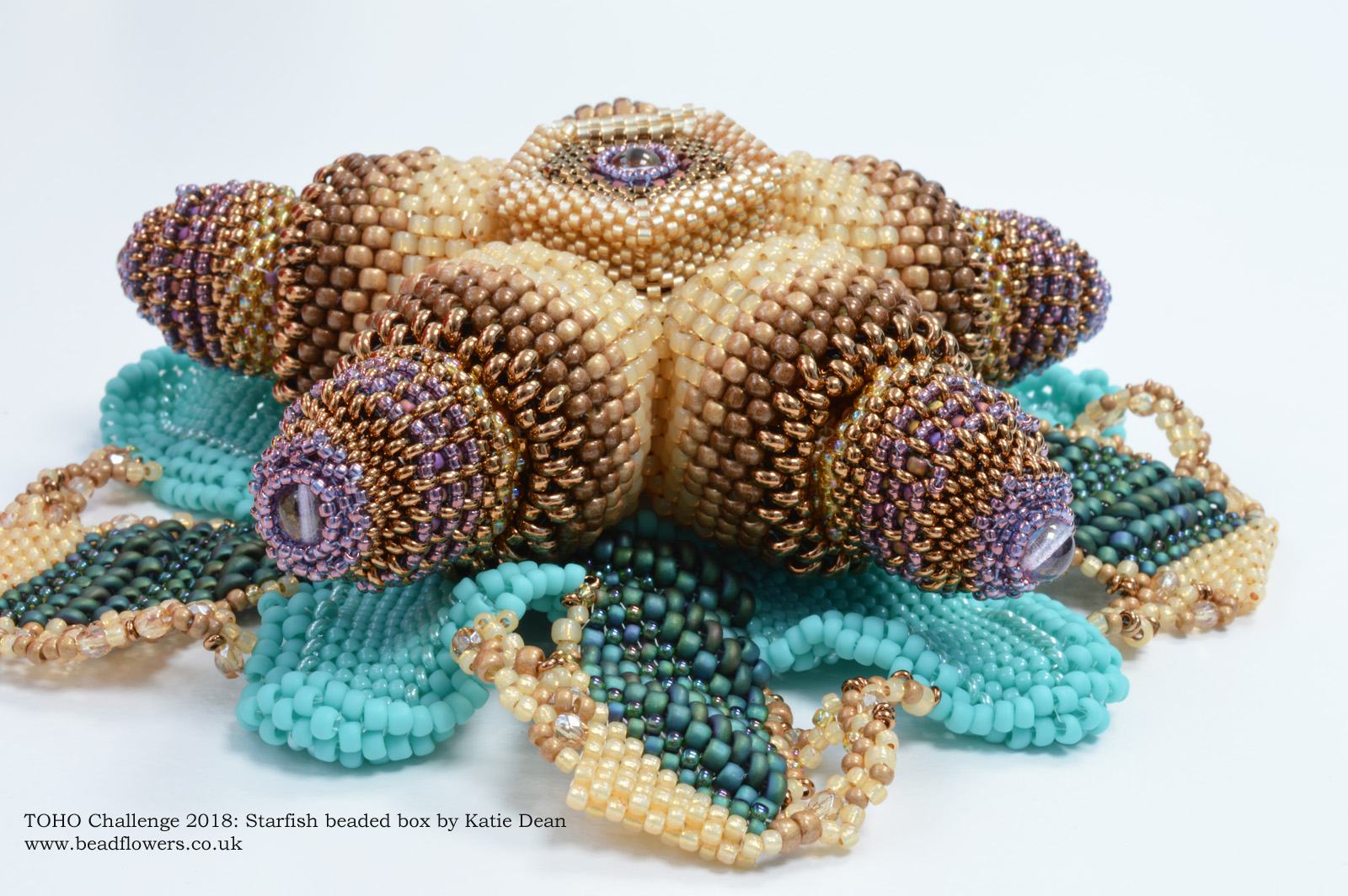 So, how did I get away with this?

Well, I used the rounded beads to create the starfish legs. I made these as drawers to be pulled out. So, I wasn’t trying to rely on a fully geometric shape.

Which is when the ‘light bulb moment’ struck. If you are thinking of making beaded boxes in Peyote stitch, the structure of the box is going to be critical in determining what type of seed beads you can use.

I tried another experiment. Again, I found myself in a position of creating to order, using beads supplied by a wholesaler. In this case, the Beadsmith wanted a simple project that would show-case their (then) new Cymbal Elements.

So, again, I really wanted to make a beaded box. I decided to be brave and try a basic triangular shape this time. This is the result. 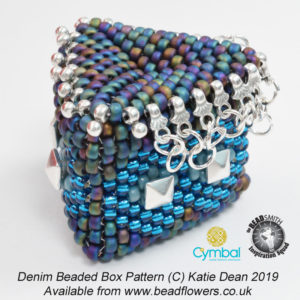 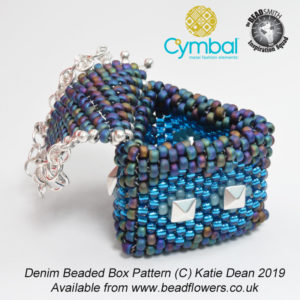 So, I had to use size 8/0 seed beads in order to fit the Cymbal Elements into the design. I made a few compromises on style when it came to the lid. But the technique did actually work. Although…

I found I had a much less solid structure, as you would expect. The rounded edges of the seed beads didn’t lock together quite as well. So, it would not be possible to scale this box up to a larger size. I really only got away with it because the box is small.

Putting the lessons together

So, now we’re getting somewhere. Discoveries so far:

So, let’s move on to one final experiment…the photo you saw as the featured image for this blog post. 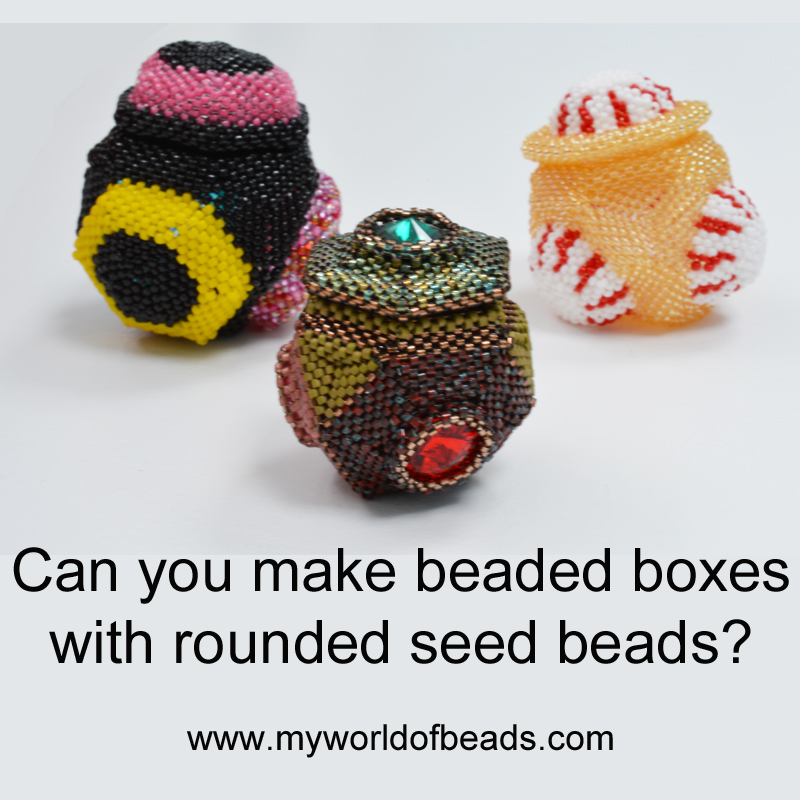 Believe it or not, all three of these beaded boxes are basically the same design. It started life as the Rivoli beaded box you see in the centre front. I made this with delicas, but it involves a process of joining smaller geometric shapes.

So, I thought that might translate to rounded seed beads. It does…sort of…

I found I actually needed to change the assembly method to make this design with the rounded seed beads. So, I first made the ‘mint candy’ beaded box that you see back right. For that, I used Miyuki rounded seed beads. Now, this brand is VERY rounded. So, it was a bit of a struggle to get the tension right to make the project work.

I had more success with the Matsuno brand of seed beads (liquorice allsorts box). Although still rounded, they do have slightly straighter edges. So, they were a little closer to the original cylinder beads.

And that brings me to the final take-away from this experiment. Not all rounded seed bead brands are created equal. They all have different strengths and weaknesses. So, they are suited to different types of projects. And if that is something you want to explore further, then take a look at this blog.

What should you take away from this?

Firstly, if you are interested in making beaded boxes, it is possible to make some (not all) designs with rounded seed beads.

So, you should follow the instructions given by the designer in the tutorial. Naturally, if you want to experiment on your own, you can. But just be aware that ‘bad things’ may happen if you diverge from the designer’s suggested beads.

If you are going to experiment, then bear these things in mind…

And again, if you’re quite new to all this and need to learn the basic techniques first, check out this link.

So, for the curious-minded, I hope that answers your question about making beaded boxes with rounded seed beads.