The answer is: she didn’t. This interview with Katie Dean was scheduled for the December 2020 issue of Bead and Button magazine. (Which is why the article features so many festive projects!).

So, Cindy Crain Newman carried out the interview, in July 2020, ready for the editing process in advance of publication. A mere matter of weeks later, just as Cindy was putting the finishing touches to her article, the company behind Bead and Button magazine made a shocking announcement.

25 years after its first appearance on our newsstands, Bead and Button would be closing down. The final issue to be published in October 2020.

So, all that hard work that Cindy had put into writing this lovely interview with Katie Dean looked like it would go to waste. But no! Cindy, being the kind and generous soul that she is, contacted me (Katie) and said she was very happy for me to publish the full article on my blog, here. And, since Cindy did such a wonderful job, I leapt at the chance. It seemed too much of a waste of the time she had so generously given to this, if it wasn’t to be appreciated by the world.

So, thank you Cindy for being such a pleasure to work with. Thank you for putting my story into words so beautifully. And, may this also be a tribute to all the issues of Bead and Button that we’ve all enjoyed over the past quarter-century. 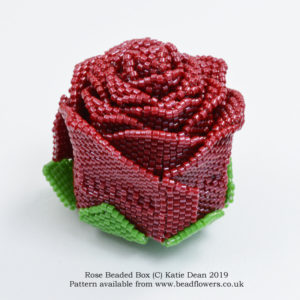 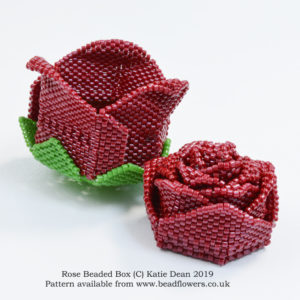 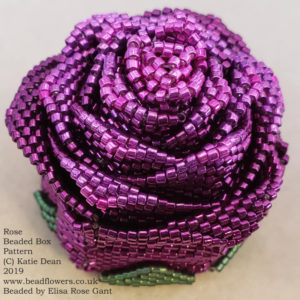 An Interview with Katie Dean, written by Cindy Crain Newman

After earning a doctoral degree in history at Cambridge University and working as a management consultant in London, it might seem unusual that Katie Dean, 44, now works as a bead designer.

But she lives with a chronic disease—myalgic encephalomyelitis, which is also known as chronic fatigue syndrome. With an exceedingly positive attitude, she says that “every experience in my life has dovetailed. Nothing has been wasted.”

Her love of learning and the finely-honed academic skills of researching, writing and teaching helped Dean gradually to transition to a new career after her illness struck in 2002. She literally collapsed on the way into work one day.

It took doctors six months to diagnose her illness. It was when she was so sick that she was largely bed-bound for several months that she received a publication from a bead shop in the UK, advertising bead books. Dean knew nothing about stitches or techniques. But on this list was Arlene Baker’s book, Beads in Bloom, with a three-dimensional rose on the cover. 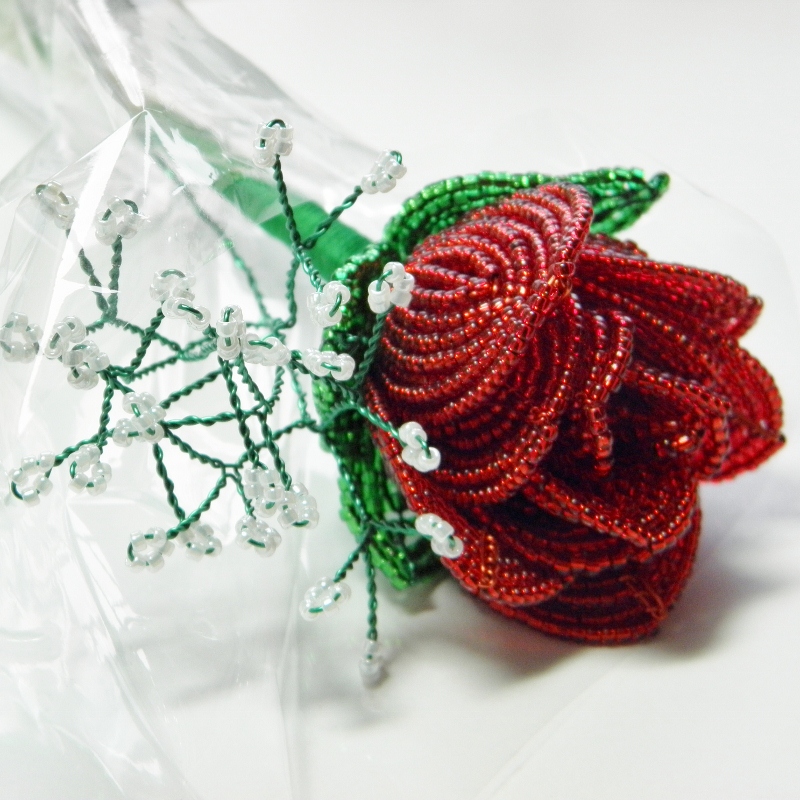 “I looked at that rose and thought: ‘Wow – I have to learn how to do this.’ So my parents gave me the book for my 27th birthday in 2003. But I was so, so ill that it took me a couple of days to work up the energy,” Dean says. “I found a few random tubes of beads leftover from childhood crafting hobbies. It took me an hour to make my first tiny flower, and then all my energy for the day was gone. But I thought that finally I had done something worthwhile, even if it was only making this little flower.”

Dean kept learning beading techniques, if only for 10 minutes at a time. It gave her a great sense of fulfillment. She found it therapeutic, relaxing, and meditative.  Her first design was for a ballerina costume, as her dream as a young girl had been to become a ballerina. 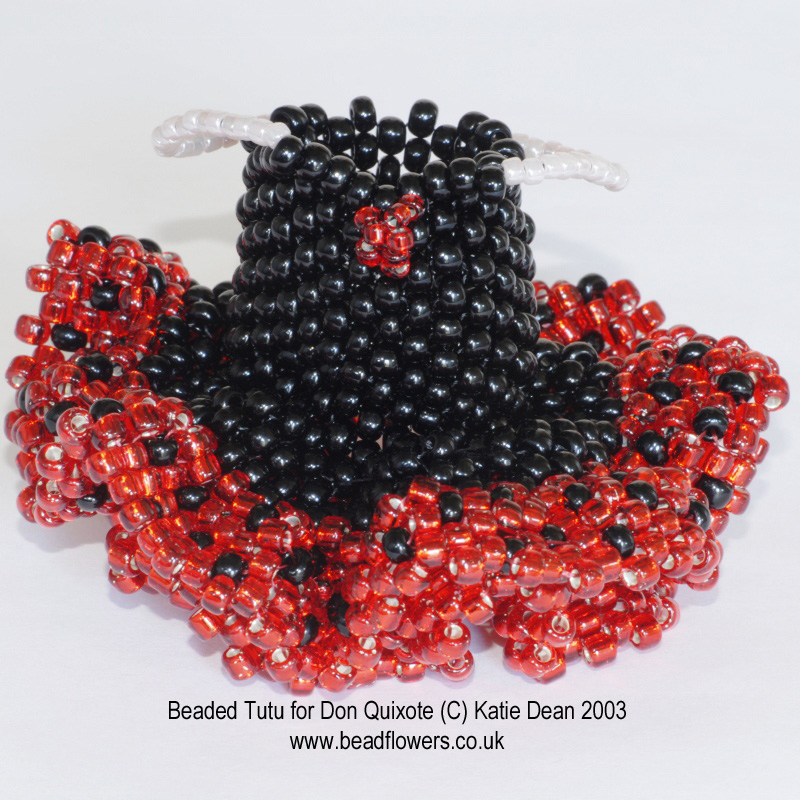 Having learned how to live productively in spite of her illness, Dean today designs, conducts online classes, and sells ebooks and individual patterns on beadflowers.co.uk. Most showcase her love for sculptural designs.

“I find 3D much more normal and easier than 2D,” Dean says.  “Even in art classes as a teenager at school, I was much better at sculpture than painting and drawing. But I started drawing classes at the end of 2019 and discovered that there’s more of an artist in me than I realized. I’m growing all the time, as all of us do. There’s so much to learn and experiment with when working with beads.” 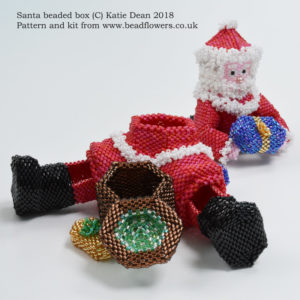 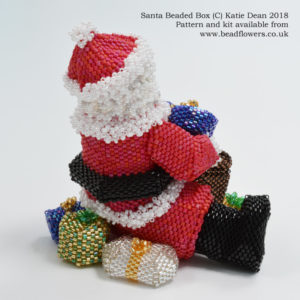 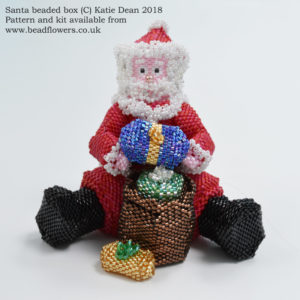 Her “Santa Beaded Box” gives a whole new meaning to a “Secret Santa” with his four hidden compartments. Pull his boots, and his legs slide out to reveal two drawers. The other two can be revealed by lifting his head up from the waist and by lifting the top off Santa’s sack.

“I was probably making something entirely unrelated to Christmas,” Katie admits. “I just love playing around with making boxes of different shapes and taking them in new directions. My brain takes really weird leaps of fancy sometimes. At some point, I just had this vision in my head that it would be cool if Santa’s legs pulled out. So then I knew he had to be sitting down. It was an interesting experiment in how techniques could work.”

Among her other Christmas designs are an Advent calendar with 24 little boxes. Her beaded Christmas jumpers (called sweaters in the US) were inspired by a scene in the movie “Bridget Jones’s Diary”. Colin Firth’s character wore a goofy reindeer jumper to a party, acting as a conversation starter with Bridget. 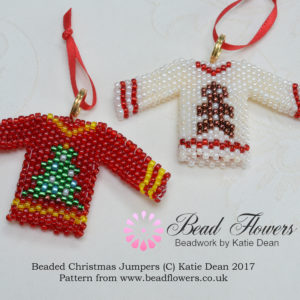 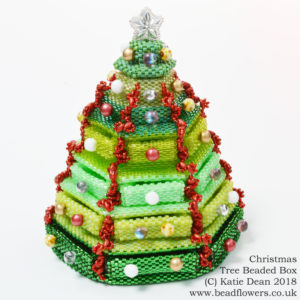 Dean’s “Beaded Christmas Tree” design is comprised of 24 layered boxes which pull out and a 25th box on top. It is made with seven shades of green size 10 cylinder beads and measures about six inches tall and four inches across at the base. When she was interviewed for this story, she was celebrating “Christmas in July”, working on her newest design of a Nativity stable.

When Dean’s mind is not filled with visions of a beaded Christmas, she has delved into other sculptural designs. 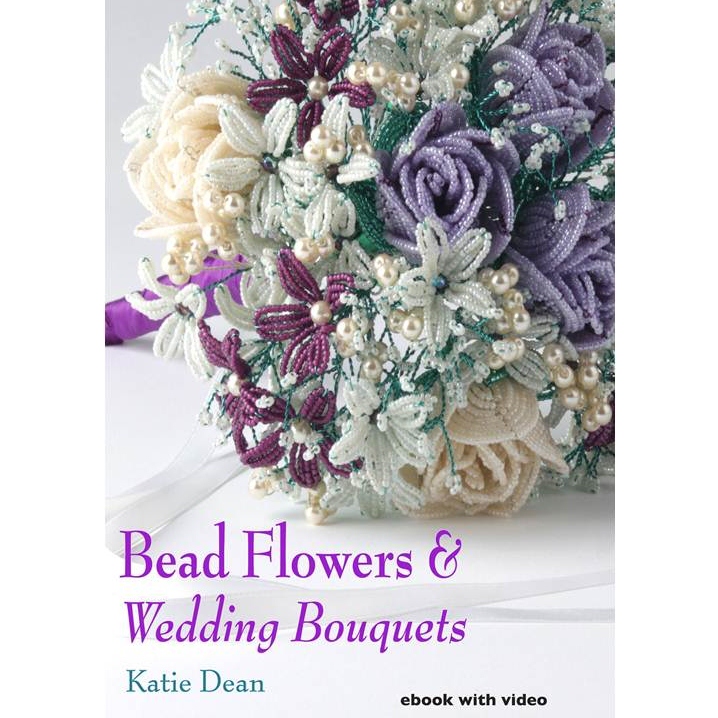 Her very first ebook described how to create a flowered wedding bouquet using French beading. One bouquet has seven roses with about 2,000 beads in each rose, and a few thousand other beads in addition. Dean says. “They weigh so much, that it’s not something that you want to throw at your wedding!”

Another book has patterns on making sweet treats like cupcakes. The “Cupcake Beaded Box” is made using around 6,000 beads and uses cellini spiral stitch with SuperDuo beads for the icing. Because of her illness, she doesn’t eat refined sugar. So, for a sweet “fix”, she resorts to beading cakes and chocolates. 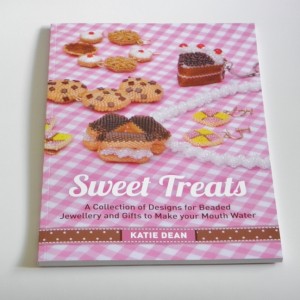 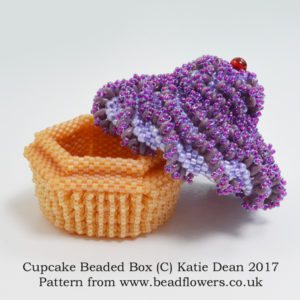 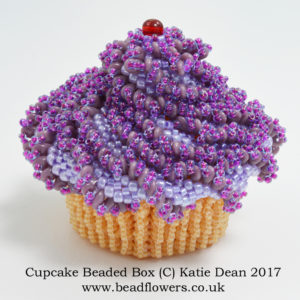 “The beading and my illness have gone along in parallel,” Dean says.  “It was somehow written in the stars that I would end up here.”

Well, let me say a huge thank you to Cindy. You can find her on LinkedIn. So, if you need a freelance writer, look her up!

Then, if you enjoy reading the stories behind the designers you love, then why not check out a few more. This section of the website is dedicated to designer interviews. So, use this link to discover more now.