I hadn’t planned to 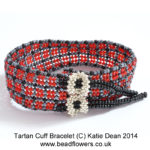 write this post, but yesterday’s post generated so much interest and discussion, some here, some on my Facebook page, that I found myself with more to say! So, I want to set the cat among the pigeons and take a different look at the idea of copying beadwork. I’m going to do what comes least naturally to me and try to keep this post shorter! In case anyone is wondering, Google just reminded me that it’s St Andrew’s Day, so in honour of the occasion and my Scottish beading friends, I’m using my tartan cuff bracelet pattern to illustrate this post!

A Few Thoughts for the Day

As I said, lots of discussion and lots of thought-provoking comments to my three reasons why copying beadwork is a really bad idea. So, I thought I would try and summarise my reaction to these. I said that all of this is a really grey area, so I’m not about to offer any answers here – just more questions.

Firstly, let’s look at my tartan cuff. What is actually my copyright in that? Not the beading

stitches – nobody owns the copyright to techniques. How about the Tartan? That’s a trickier one. If I had copied an actual Tartan, then could I be breaking the copyright owned by the clan to whom it belongs? I suspect ‘yes’, but I’m actually not certain. Tartan as a concept of an arrangement of stripes in differing colours and widths is not copyrighted. So, does the fact that I sat down and worked out my colouring and my pattern give me the copyright to that part – yes, I believe so. Also, the idea of the shape and the clasp were original to me, so my copyright. However, it is not impossible that someone else had the idea of beading tartan, designed their own version and by sheer coincidence, the colours and pattern are the same as mine. Neither of us copied the other.

This is a big point: coincidences do happen. At the end of the day, there are only so many ways in which beads can be joined together. Another interesting point that came 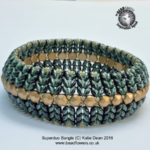 up yesterday: the shaped seed beads are designed to specifically fit together in particular ways. There may be multiple ways, but they will be finite. So if you are trying to make basic patterns, keep to a small selection of beads and so on, it is almost guaranteed that you will end up making something that someone else has made. If you focus on trying to be totally original, maybe you end up getting so complex or so ‘different’ that your work loses its visual appeal.

I also mentioned that copying beadwork is an emotive issue. With the internet, there is undeniably a loss of control over beadwork patterns. Once you let them loose, it’s hard to keep track of where they end up and what happens to them. Some people take the view that they just don’t want to share online because of this. If everyone took this view, 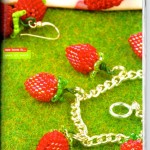 the beading world would be a poorer place with few patterns and little inspiration. The other problem with the internet is that it is too frequently used as a forum for a public witch hunt. I’m not only talking about beading patterns here. How often have we seen someone accused of doing something immoral or illegal and then find that every human being has an opinion which they feel morally obliged to air without actually knowing the facts and with seemingly no consideration for politeness or even compassion? The same thing has happened in the beading community with public witch-hunts over copyright in which designers are hurt, reputations are ruined and there may or may not have been an infringement in the first place. On the other side of the coin, there are some individuals who deliberately use the internet to infringe copyright.

So, whilst this is a debate that will go on and on and on, and whilst I certainly do not have an answer, it is also good to keep having conversations. I said yesterday that some copyright infringements occur through ignorance. Although it is not an excuse, it does leave us all with a duty to educate. Sometimes that is through an article, but 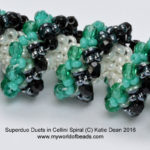 sometimes that is through dealing with a copyright infringement in a grown-up, compassionate manner. One of the comments in relation to yesterday’s article talked about respect for designers. That pretty much sums it up, but respect works both ways. As a designer I believe we also have a duty to take sensible steps to protect our work (for example, adding a copyright logo or information to every photo we publish online – after all when it randomly turns up on Pinterest, how else will anyone know you made it?). We also have a duty to respect others in the industry, so if copying is suspected, the first step should be a private conversation with the person you suspect of infringement, not a public gnashing of teeth on social media (that may come as a last resort! In my opinion though, it only has a place in order to alert the rest of the beading community to a serious, recurring problem, not just in a fit of rage or spite). Much as I hate to say this, we also have to admit that we live in an imperfect world, not utopia, so sometimes it is necessary to simply ‘suck it up’ and ‘move on’. Sometimes it even becomes an opportunity to bring your work to a wider audience, so try to take the positives.

The real reason why I want to write this post is to tell you a little story. For various reasons that aren’t important, I was aware of intellectual property law long before I started beading. So I began designing beadwork with a clear belief in my need to be original and a strong fear of accidentally copying beadwork that had been done before. In my early days, I tried to avoid working from other people’s patterns because I was afraid that I would end up accidentally copying something. Every time I saw a photo with an idea that had already crossed my mind, my heart sank, ‘that’s another thing I can’t make now,’ I would think to myself. I felt under enormous pressure to be completely original and I began to think about other industries. I wondered how great artists managed to come up with so many works of art. I began to think that originality of thought was what defines ‘genius’ and I am most certainly no genius.

Then I went to a fascinating exhibition at Tate Britain, all about the artist JMW Turner. I knew very little about him. The exhibition had taken a really interesting point of view, looking at how his work had been influenced by and related to other great artists. Now, Turner didn’t live in the age of the internet and I would argue, although copyright law did exist at the time he was painting, the whole ‘sue somebody for anything’ culture that we now have, did not exist. Turner’s exposure to the work of others came from the fact that artists worked together in a community (not literally, but much as we talk about the beading community online). The thing that really fascinated me was seeing paintings by other really, really famous artists (Rembrandt had been a big influence, for example) and reading that Turner had seen certain paintings, thought, ‘great idea, but I could do better,’ and gone away to paint his own version. I’m not for a second suggesting that Turner did nothing more than copy others – he is one of the most celebrated artists and his originality is undeniable. I always think of him as changing the way that people looked at and portrayed light in art. He may have painted the same scene as another artist and he may even have done this because he saw the other artist’s painting first, but he undeniably brought his own special style to it and the art world benefitted.

Why am I telling you this? It made me see that ‘copying’ and ‘being original’ are not always polar opposites. Sometimes you need to try copying in order to grow your own style or discover a new technique. The critical thing that makes this ethical/unethical is how you do it. If you gain the artists’ permission and acknowledge their influence on your work, then it does not make you less talented. It is a way of growing that benefits the whole community as well as you yourself.